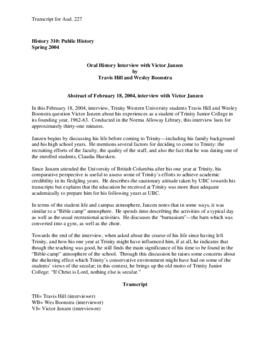 Audio 227a consists of the following recording:
Title: Victor Janzen – “Oral History Interview”
In this February 18, 2004, interview, Trinity Western University students Travis Hill and Wesley Boonstra question Victor Janzen about his experiences as a student of Trinity Junior College in its founding year, 1962-63. Conducted in the Norma Alloway Library, this interview lasts for approximately thirty-one minutes. Janzen begins by discussing his life before coming to Trinity—including his family background and his high school years. He mentions several factors for deciding to come to Trinity: the recruiting efforts of the faculty, the quality of the staff, and also the fact that he was dating one of the enrolled students, Claudia Huesken. Since Janzen attended the University of British Columbia after his one year at Trinity, his comparative perspective is useful to assess some of Trinity’s efforts to achieve academic credibility in its fledgling years. He describes the cautionary attitude taken by UBC towards his transcripts but explains that the education he received at Trinity was more than adequate academically to prepare him for his following years at UBC. In terms of the student life and campus atmosphere, Janzen notes that in some ways, it was similar to a “Bible camp” atmosphere. He spends time describing the activities of a typical day as well as the usual recreational activities. He discusses the “barnasium”—the barn which was converted into a gym, as well as the choir. Towards the end of the interview, when asked about the course of his life since having left Trinity, and how his one year at Trinity might have influenced him, if at all, he indicates that though the teaching was good, he still finds the main significance of his time to be found in the “Bible-camp” atmosphere of the school. Through this discussion he raises some concerns about the sheltering effect which Trinity’s conservative environment might have had on some of the students’ views of the secular; in this context, he brings up the old motto of Trinity Junior College: “If Christ is Lord, nothing else is secular.” [Abstract and transcript provided by Travis Hill and Wesley Boonstra, Public History students, 2004]
Janzen was one of the first 17 students enrolled at Trinity Junior College in 1962