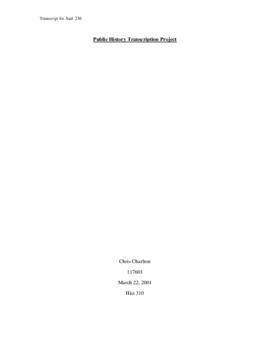 Audio 236a and 236b consist of the following recording:
Title: Robert N. Thompson – “Oral History Interview”
Bob Thompson is interviewed by Lynn Wilkinson, library staff member. He begins his tale with a brief overview of how his family originally came to Canada (he was born in 1917 in the U.S.). Thompson briefly discusses his childhood and early education and then moves on to the troubles his family experienced during the Depression, and his own quest to pursue higher education. He completed a teacher’s diploma and at the same time became involved in the Social Credit movement sweeping the Prairies. He enrolled in a chiropractic school in Iowa, where he met his wife-to-be, Hazel Kurth. Thompson returned to Canada, and after working with Social Credit again briefly, he set up his own practice. The Second World War broke out, and he enlisted in the air force, where he met the RAF chaplain who recommended he go to Ethiopia to help the country recover from the war.
[Notes provided by Chris Charlton, Public History student, 2001]