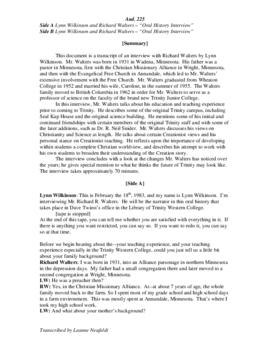 Audio 225 consists of the following recording:
Title: Richard Walters – “Oral History Interview”
Mr. Walters was born in 1931 in Wadena, Minnesota. His father was a pastor in Minnesota, first with the Christian Missionary Alliance in Wright, Minnesota, and then with the Evangelical Free Church in Annandale, which led to Mr. Walters’ extensive involvement with the Free Church. Mr. Walters graduated from Wheaton College in 1952 and married his wife, Caroline, in the summer of 1955. The Walters family moved to British Columbia in 1962 in order for Mr. Walters to serve as a professor of science on the faculty of the brand new Trinity Junior College. In this interview, Mr. Walters talks about his education and teaching experience prior to coming to Trinity. He describes some of the original Trinity campus, including Seal Kap House and the original science building. He mentions some of his initial and continued friendships with certain members of the original Trinity staff and with some of the later additions, such as Dr. R. Neil Snider. Mr. Walters discusses his views on Christianity and Science at length. He talks about certain Creationist views and his personal stance on Creationist teaching. He reflects upon the importance of developing within students a complete Christian worldview, and describes his attempt to work with his own students to broaden their understanding of the Creation story. The interview concludes with a look at the changes Mr. Walters has noticed over the years; he gives special mention to what he thinks the future of Trinity may look like. The interview takes approximately 70 minutes. [Abstract and transcript provided by Leanne Neufeldt, Public History student, 2001]
Notes provided by BF, student assistant, 2010/2011