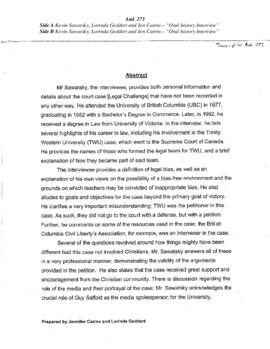 Audio 273 consists of the following recording:
Title: Kevin Sawatsky – “Oral history Interview”
Lorinda Geddert and Jen Cairns, Trinity Western University students, interview Kevin Sawatsky, lawyer and TWU business professor, on the topic of the Legal Challenge. Mr Sawatsky provides both personal information and details about the education court case [Legal Challenge] that have not been recorded in any other way. He attended the University of British Columbia (UBC) in 1977, graduating in 1982 with a Bachelor’s Degree in Commerce. Later, in 1992, he received a degree in Law from University of Victoria. In the interview, he lists several highlights of his career in law, including his involvement in the Trinity Western University (TWU) case, which went to the Supreme Court of Canada. He provides the names of those who formed the legal team for TWU, and a brief explanation of how they became part of said team.
The interviewee provides a definition of legal bias, as well as an explanation of his own views on the possibility of a bias-free environment and the grounds on which teachers may be convicted of inappropriate bias. He also alludes to goals and objectives for the case beyond the primary goal of victory. He clarifies a very important misunderstanding: TWU was the petitioner in this case. As such, they did not go to the court with a defense, but with a petition. Further, he comments on some of the resources used in the case; the British Columbia Civil Liberty’s Association, for example, was an intervener in the case.
Several of the questions revolved around how things might have been different had this case not involved Christians. Mr. Sawatsky answers all of these in a very professional manner, demonstrating the validity of the arguments provided in the petition. He also states that the case received great support and encouragement from the Christian community. There is discussion regarding the role of the media and their portrayal of the case; Mr. Sawatsky acknowledges the crucial role of Guy Saffold as the media spokesperson for the University.
[Abstract and transcript provided by Lorinda Geddert and Jen Cairns, Public History students, 2001]