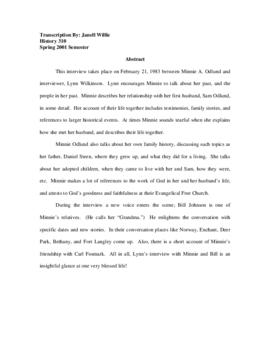 Audio 232a consists of the following recording:
Title: Minnie A. Odland – “Oral History Interview”
This interview takes place on February 21, 1983 between Minnie A. Odland - wife of Sam Odland, a pastor who founded the first Canadian Evangelical Free Church, in Enchant, Alberta - and interviewer Lynn Wilkinson, a library staff member. Lynn encourages Minnie to talk about her past, and the people in her past. Minnie describes her relationship with her first husband, Sam Odland, in some detail. Her account of their life together includes testimonies, family stories, and references to larger historical events. At times Minnie sounds tearful when she explains how she met her husband, and describes their life together. Minnie also talks about her own family history, discussing such topics as her father, Daniel Steen [formerly Orsteen?], where they grew up, and what they did for a living. She talks about her adopted children, when they came to live with her and Sam, how they were, etc. Minnie makes a lot of references to the work of God in her and her husband’s life, and attests to God’s goodness and faithfulness at their Evangelical Free Church. During the interview a new voice enters the scene; Bill Johnson is one of Minnie’s relatives (he calls her “Grandma”) and a member of Trinity's founding Board. He enlightens the conversation with specific dates and new stories
Audio 232b consists of the following recording:
Title: Minnie A. Odland & Bill Johnson – “Oral History Interview”
This is a continuation of Aud. 232a. [See Aud. 233 for the complete transcript.] In their conversation places like Norway, Enchant, Deer Park, Bethany, and Fort Langley come up. Also, there is a short account of Minnie’s friendship with Carl Fosmark. They discuss Bill Johnson's upbringing, heritage, and church-related activities, as well as the Evangelical Free Church, Carl Fosmark, and Trinity Western College.
[Abstract and transcript provided by Janell Willie, Public History student, 2001]
It was as a result of revival movements among Norwegian immigrants in 1911 that the Evangelical Free Church of Canada came into being. These revivals resulted in the establishment of a short-lived congregation in Winnipeg in 1913. In June of 1917 at Enchant, Alberta, a congregation was organized which continues to this day. This church is regarded as the official origin of the EFCC. As a result of a revival movement in Enchant, members of the Fosmark family were converted. The Fosmark family, particularly brothers Carl and Lee, gave noteworthy leadership to the development of the EFCC.
Source: http://www.efccm.ca/wordpress/?page_id=271 (accessed March 2011)

In the transcript, Minnie's name is incorrectly recorded as Minnie Anina Odlund. In an email dated May 31, 2013, Minnie's grand-daughter, Louise Odland, provided the following information: My Grandmother's name should be spelled ODLAND not Odlund. My grandmother's correct name is: Minnie Aneena Odland (1896-1994). Her maiden name was Steen. Minnie's daughter, Josephine Odland, married Bill Johnson. My father was Josephine's brother.