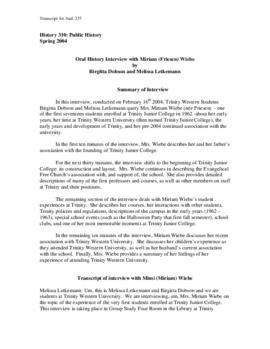 Audio 237a consists of the following recording:
Title: Miriam (Friesen) Wiebe – “Oral History Interview”
In this interview, conducted on February 16th 2004, Trinity Western students Birgitta Dobson and Melissa Letkemann query Mrs. Mimi Wiebe (née Friesen) - one of the first seventeen students enrolled at Trinity Junior College in 1962 - about her early years, her time at Trinity Western University (then named Trinity Junior College), the early years and development of Trinity, and her continued association with the university. In the first ten minutes of the interview, Mrs. Wiebe describes her and her father’s association with the founding of Trinity Junior College. Her father [Henry Friesen?] was a member of the school's Board, and - with Enarson - was responsible for finding the property. For the next thirty minutes, the interview shifts to the beginning of Trinity Junior College, its construction and layout. Mrs. Wiebe continues in describing the Evangelical Free Church’s association with, and support of, the school. She also provides detailed descriptions of many of the first professors and courses, as well as other members on staff at Trinity and their positions.
Audio 237b consists of the following recording:
Title: Miriam (Friesen) Wiebe – “Oral History Interview”
This is a continuation of Aud. 237a. Wiebe describes her courses, her interactions with other students, Trinity policies and regulations, descriptions of the campus in the early years (1962 – 1963), special school events (such as the Halloween Party that first fall semester), school clubs, and some of her most memorable moments at Trinity Junior College. In the final ten minutes of the interview, Wiebe discusses her more recent association with Trinity Western University. She discusses her children’s experiences as they attended Trinity Western University, as well as her husband’s current association with the school.
[Abstract and transcript provided by Birgitta Dobson and Melissa Letkemann, Public History students, 2004]