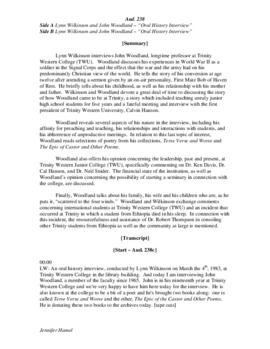 Audio 238 consists of the following recording:
Title: John Woodland – “Oral History Interview”
Audio 238a is part 3 of 3.
Audio 238c is part 1 of 3.
Audio 238d is part 2 of 3.
Audio 238e is a duplicate of Aud. 238c and beginning of Aud. 238d.
Audio 238f is a duplicate of the end of Aud. 238d and 238a.
Notes provided by BF, student assistant, 2010/2011
Lynn Wilkinson, library staff member, interviews John Woodland, longtime professor at Trinity Western College ( later TWU). Woodland discusses his experiences in World War II as a soldier in the Signal Corps and the effect that the war and the army had on his predominantly Christian view of the world. He tells the story of his conversion at age twelve after attending a sermon given by an on-air personality, "First Mate Bob" of Haven of Rest. He briefly tells about his childhood, as well as his relationship with his mother and father. Wilkinson and Woodland devote a great deal of time to discussing the story of how Woodland came to be at Trinity, a story which included teaching unruly junior high school students for five years and a fateful meeting and interview with the first president of Trinity Western University, Calvin Hanson. Woodland reveals several aspects of his nature in the interview, including his affinity for preaching and teaching, his relationships and interactions with students, and his abhorrence of unproductive meetings. In relation to this last topic of interest, Woodland reads selections of poetry from his collections, Terse Verse and Worse and The Epic of Castor and Other Poems. Woodland also offers his opinion concerning the leadership, past and present, at Trinity, specifically commenting on Dr. Ken Davis, Dr. Cal Hanson, and Dr. Neil Snider. The financial state of the institution, as well as Woodland’s opinion concerning the possibility of starting a seminary in connection with the college, are discussed. Finally, Woodland talks about his family, his wife and his children who are, as he puts it, “scattered to the four winds.” Woodland and Wilkinson exchange comments concerning international students at Trinity and an incident that occurred at Trinity in which a student from Ethiopia died in his sleep. In connection with this incident, the resourcefulness and assistance of Dr. Robert Thompson in consoling other Trinity students from Ethiopia, as well as the community at large, is mentioned.
[Abstract and transcript provided by Jennifer Hamel, Public History student, 2001]