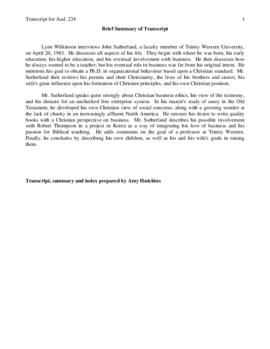 Audio 234a consists of the following recording:
Title: John Sutherland – “Oral History Interview”
Library staff member Lynn Wilkinson interviews John Sutherland, a faculty member of Trinity Western University, on April 20, 1983. He discusses all aspects of his life, beginning with where he was born, his early education, his higher education, and his eventual involvement with business. He then discusses how he always wanted to be a teacher, but his eventual role in business was far from his original intent. He mentions his goal to obtain a Ph.D. in organizational behaviour based upon a Christian standard. Mr. Sutherland then reflects on his parents and their Christianity, the lives of his brothers and sisters, his wife's great influence upon his formation of Christian principles, and his own Christian position. Mr. Sutherland speaks quite strongly about Christian business ethics, his view of the economy, and his distaste for an unchecked free enterprise system. In his master's study of usury in the Old Testament, he developed his own Christian view of social concerns, along with a growing wonder at the lack of charity in an increasingly affluent North America.
Audio 234b consists of the following recording:
Title: John Sutherland – “Oral History Interview”
This is a continuation of the interview on Aud. 234a. Sutherland stresses his desire to write quality books with a Christian perspective on business. He describes his possible involvement with Robert Thompson in a project in Korea as a way of integrating his love of business and his passion for biblical teaching. He comments on the goal of a professor at Trinity Western. Finally, he concludes by describing his own children, as well as his and his wife's goals in raising them.
[Abstract and transcript provided by Amy Hutchins, Public History student, 2001]