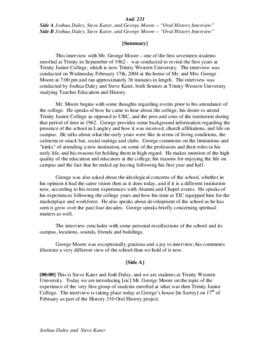 Audio 231a consists of the following recording:
Title: George Moore – “Oral History Interview”
This interview with Mr. George Moore – one of the first seventeen students enrolled at Trinity in September of 1962 - was conducted to revisit the first years at Trinity Junior College, which is now Trinity Western University. The interview was conducted on Wednesday February 17th, 2004 at the home of Mr. and Mrs. George Moore at 7:00 pm and ran approximately 36 minutes in length. The interview was conducted by Joshua Daley and Steve Kater, both Seniors at Trinity Western University studying Teacher Education and History. Mr. Moore begins with some thoughts regarding events prior to his attendance of the college. He speaks of how he came to hear about the college, his desire to attend Trinity Junior College as opposed to UBC, and the pros and cons of the institution during that period of time. George provides some background information regarding the presence of the school in Langley and how it was received, church affiliations, and life on campus. He talks about what the early years were like in terms of living conditions, the cafeteria or snack bar, social outings and clubs. George comments on the limitations and "kinks" of attending a new institution, on some of the professors and their roles in his early life, and his reasons for holding them in high regard. He makes mention of the high quality of the education and educators at the college, his reasons for enjoying life on campus and the fact that he ended up leaving following his first year and half. George was also asked about the ideological concerns of the school, whether in his opinion it had the same vision then as it does today, and if it is a different institution now, according to his recent experiences with Alumni and Chapel events. He speaks of his experiences following the college years and how his time at TJC equipped him for the marketplace and workforce. He also speaks about the development of the school as he has seen it grow over the past four decades. George speaks briefly concerning spiritual matters as well.
Audio 231b consists of the following recording:
Title: George Moore – “Oral History Interview”
The interview concludes with some personal recollections of the school and its campus, location, sounds, friends and buildings. George Moore was exceptionally gracious and a joy to interview; his comments illustrate a very different view of the school than we hold of it now. [Abstract and transcript provided by Joshua Daley and Steve Kater, Public History students, 2004]
Moore was one of the first 17 students enrolled at Trinity Junior College in 1962