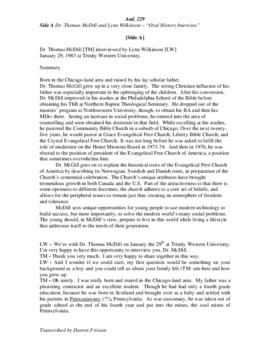 Audio 229a consists of the following recording:
Title: Dr. Thomas McDill – “Oral History Interview”
Library staff member Lynn Wilkinson interviews Dr. Thomas McDill [EFCA President, 1976-1990] Born in the Chicago-land area and raised by his lay scholar father, Dr. Thomas McGill grew up in a very close family. The strong Christian influence of his father was especially important in the upbringing of the children. After his conversion, Dr. McDill improved in his studies at the Philadelphia School of the Bible before obtaining his ThB at Northern Baptist Theological Seminary. He dropped out of the masters’ program at Northwestern University, though, to obtain his BA and then his MDiv there. Seeing an increase in social problems, he entered into the area of counselling and soon obtained his doctorate in that field. While excelling at his studies, he pastored the Community Bible Church in a suburb of Chicago. Over the next twenty-five years, he would pastor at Grace Evangelical Free Church, Liberty Bible Church, and the Crystal Evangelical Free Church. It was not long before he was asked to fulfil the role of moderator on the Home Missions Board in 1973-74. And then in 1976, he was elected to the position of president of the Evangelical Free Church of America, a position that sometimes overwhelms him. Dr. McGill goes on to explain the historical roots of the Evangelical Free Church of America by describing its Norwegian, Swedish and Danish roots, in preparation of the Church’s centennial celebration. The Church’s unique attributes have brought tremendous growth in both Canada and the U.S. Part of the attractiveness is that there is some openness to different doctrines; the church adheres to a core set of beliefs, and allows for the peripheral issues to remain just that, creating an atmosphere of freedom and tolerance. McDill sees unique opportunities for young people to use modern technology to build success, but more importantly, to solve the modern world’s many social problems. The young should, in McDill’s view, prepare to live in this world while living a lifestyle that addresses itself to the needs of their generation. [Abstract and transcript provided by Darren Friesen, Public History student, 2001]
At [21:26] a new recording begins. An unidentified man and woman discuss the debt collection and credit application processes.
Audio 229b consists of the following recording:
Title: Symphony Performance / Audio Book – “Star Wars Episode IV: A New Hope”
Digitized sound file not attached, due to copyright restrictions
Notes provided by BF, student assistant, 2010/2011