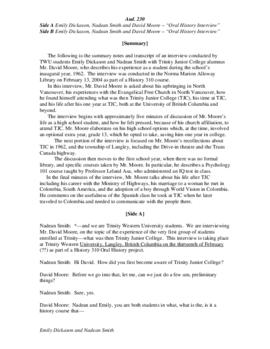 Audio 230a consists of the following recording:
Title: David Moore – “Oral History Interview”
This interview was conducted by TWU students Emily Dickason and Nadean Smith with Trinity Junior College alumnus Mr. David Moore, who describes his experience as a student during the school’s inaugural year, 1962. The interview was conducted in the Norma Marion Alloway Library on February 13, 2004 as part of a History 310 course. In this interview, Mr. David Moore is asked about his upbringing in North Vancouver, his experiences with the Evangelical Free Church in North Vancouver, how he found himself attending what was then Trinity Junior College (TJC), his time at TJC, and his life after his one year at TJC, both at the University of British Columbia and beyond. The interview begins with approximately five minutes of discussion of Mr. Moore’s life as a high school student, and how he felt pressed, because of his church affiliation, to attend TJC. Mr. Moore elaborates on his high school options which, at the time, involved an optional extra year, grade 13, which he opted to take, saving him one year in college.
Audio 230b consists of the following recording:
Title: David Moore – “Oral History Interview”
This portion of the interview is focused on Mr. Moore’s recollections about TJC in 1962, and the township of Langley, including the drive-in theatre and the new Trans Canada Highway. The discussion then moves to the first school year, when there was no formal library, and to specific courses taken by Mr. Moore. In particular, he describes a Psychology 101 course taught by Professor Leland Asa, who administered an IQ test in class. In the final minutes of the interview, Mr. Moore talks about his life after TJC including his career with the Ministry of Highways, his marriage to a woman he met in Colombia, South America, and the adoption of a boy through World Vision in Colombia. He comments on the usefulness of the Spanish class he took at TJC when he later traveled to Colombia and needed to communicate with the people there.
[Abstract and transcript provided by Emily Dickason and Nadean Smith, Public History students, 2004]
Moore was one of the first 17 students enrolled at Trinity Junior College in 1962
Transcript of excerpt from approximately [43:00] Alumnus David Moore remembers the Day Typhoon Freda came to TJC.:
I was hoping that you would ask me whether there were any significant, interesting events that occurred while I was here. There was one, and that was Typhoon Freda, during that year, I think it was in October of the year. We had a typhoon that passed through Vancouver. A typhoon is a—really I guess it’s the term for hurricane but it comes off of the Pacific Ocean. And I recall that evening when Typhoon Freda was starting to move through our area. I had never ever experienced anything like that and I never have since. But we came out of our dorms, and we were standing outside here, listening to the roar in the sky, and you know when it gets windy, the wind really makes lots of noise blowing through the trees and everything; but this particular typhoon created a roar up in the sky that I had never heard before. And as we stood there with the wind blowing around us, trees started dropping on the campus, snapping off and falling down. So it was really quite an awesome experience. The following day when we got up early in the morning and went out, all down Glover Road heading towards Langley the power poles that parallel each side of the railroad track, they were all pushed over, not quite at forty-five degrees, but they were all leaning over - the wind had done a lot of damage. So that was one interesting thing that occurred during that year.