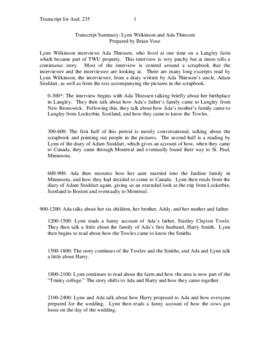 Audio 235a consists of the following recording:
Title: Ada Thiessen – “Oral History Interview”
Library staff member Lynn Wilkinson interviews Ada Thiessen (nee Towle), who lived at one time on a Langley farm which became part of TWU property. This interview is very patchy. Most of the interview is centred around a scrapbook [copy in TWU Archives] that the interviewer and the interviewee are looking at. Excerpts are read by Wilkinson, the interviewer, from a diary written by Ada Thiessen’s uncle, Adam Stoddart, as well as from the text accompanying the pictures in the scrapbook. 0-300: The interview begins with Ada Thiessen talking briefly about her birthplace in Langley. They then talk about how Ada’s father’s family came to Langley from New Brunswick. Following this, they talk about how Ada’s mother’s family came to Langley from Lockerbie, Scotland, and how they came to know the Towles. 300-600: The first half of this period is mostly conversational, talking about the scrapbook and pointing out people in the pictures. The second half is a reading by Wilkinson of the diary of Adam Stoddart, which gives an account of how, when they came to Canada, they came through Montreal and eventually found their way to St. Paul, Minnesota. 600-900: Ada then recounts how her aunt married into the Jardine family in Minnesota, and how they had decided to come to Canada. Wilkinson then reads from the diary of Adam Stoddart again, giving us an extended look at the trip from Lockerbie, Scotland to Boston and eventually to Montreal. 900-1200: Ada talks about her six children, her brother, Addy, and her mother and father. 1200-1500: Lynn reads a funny account of Ada’s father, Stanley Clayton Towle. They then talk a little about the family of Ada’s first husband, Harry Smith. Wilkinson begins to read about how the Towles came to know the Smiths. 1500-1800: The story of the Towles and the Smiths continues, and Ada and Lynn talk a little about Harry. 1800-2100: Lynn continues to read about the farm and how the area is now part of “Trinity College.” The story shifts to Ada and Harry. 2100-2400: Ada talks about how Harry proposed and how everyone prepared for the wedding. Lynn then reads a funny account of how the cows got loose on the day of the wedding. 2400-2700: They talk about the wedding and who took part in it. They then move to a brief discussion about Ford cars and the house on Trinity’s property referred to as “Hubbard House.” Ada then recounts the days on the farm without electricity or running water. 2700-3000: Ada recounts how they would get their groceries from Vancouver, and how the Smiths and the Towles would work together to make apple cider to sell. 3000-3300: Ada tells about how she and Harry finally moved off the farm and into Vancouver. 3300-3600: Ada tells about Harry’s job hauling milk between Glen Valley and Fraser Valley Dairy, and how he would work all day and study all night to become an industrial art teacher.
Audio 235b consists of the following recording:
Title: Ada Thiessen – “Oral History Interview”
This is a continuation of the interview on Aud. 235a. Ada continues to talk about her first husband, Harry. [Transcript ends here. Lynn arranges to borrow Ada's scrapbook. Ada talks about her girls getting married, about Hazel and Randolph Fox, about the store at Milner; Hazel’s daughter who was a Langley May Queen in 1939 and is now teaching in Vancouver. In 1923 George Towle married Pearl Armstrong. Lynn and Ada look over pictures and briefly discuss the Milner United Church, Fort Langley United Church, Addy and Ernest (Ada’s brothers), Eagle Harbour, the Smith's house in Vancouver on 12th Avenue, and the birth there of Marilyn. Ada reminisces about Harry driving the milk truck, about the houses in Rossland and Cloverdale, about Harry teaching industrial arts in Cloverdale and later teaching at the high school in Langley (1951-1958). In 1958 Harry had a heart attack. He passed away in 1961. Ada then mentions Dallas’s family in Calgary and concludes by talking about her family and where they are now.]
[Abstract and transcript provided by Brian Vose, Public History student, 2001]

2 copies of original cassette tape; notes of audiocassette stored in envelope in Box 09