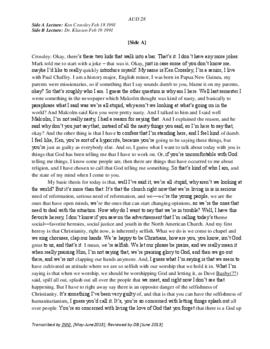 Audio 28a consists of the following recording:
Title: Ken Crossley – “Favorite Heresies in the Youth of the North American Church”
A senior student discusses the need for reformation within the church of Jesus Christ and the need for action on the part of young people. He argues that Christianity has become selfish; people worship for themselves and they forget that there is a God to worship. Crossley argues against the dualism of the church, the division between Christian and secular. He reads from a textbook and from the Bible. He speaks to the holiness of God and asks why people do not give everything to God, all the time, instead of only during "holy" activities. Crossley implores the students to give the love God has given them to the entire world.
Audio 28b consists of the following recording:
Title: Dr. John Klassen – “Christians and Gender Relations” or "The War Between the Sexes is Over"
Dr. Klassen, history professor, speaks against the stereotyping of women in popular culture as victims or as weak. He asks, “what is the Christian contribution to this phenomenon?” He recounts the history of the notion that men are superior to women. He notes the place women have taken in modern society. Klassen recounts the difficulty of Evangelicals to see equality between men and women. He argues for gender equality using Biblical evidence. Klassen notes the importance of distinguishing between time-bound notions and eternal ideas. He argues that order in family life comes from mutual sacrifice. He then leads the students in prayer.
Notes provided by BF, student assistant, 2010/2011