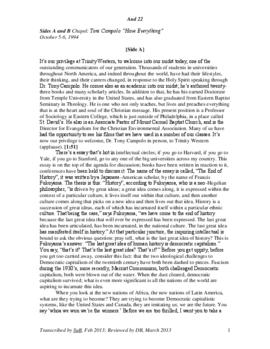 Audio 22a consists of the following recording:
Title: Dr. Tony Campolo – “Having Everything”
Dr. Campolo, an American pastor, author, sociologist, and public speaker, addresses TWU students. He begins by referencing the essay “The End of History” by Francis Fukuyama, who argues that the last great idea of the world is democratic capitalism. Campolo then discusses the concept of “having everything” and the consequences of the pursuit of “everything”. He brings in advertisements for beer and coca-cola and argues that ads are telling society their spiritual needs can be met by material things, and the system is absurd. The worst part is not that one will waste one’s life, it is that one will not be alive at all. He references Kierkegaard. The generation will not die because of sin, but because of lack of passion. He argues for passion, not just in life, but in faith. Passion, he states, is the gift of the Holy Spirit. Campolo argues that only by embracing the Kingdom of God and Jesus Christ can this generation make change in the world. Fukuyama is wrong, argues Campolo, the last great idea in history is the Kingdom of God.
Audio 22b consists of the following recording:
Title: Dr. Tony Campolo – “Risk, Reflect, and Do”
Dr. Campolo speaks to students. He encourages them to risk more, reflect more and do more things that would live on after they die. He tells several compelling personal stories relating to these ideas. Campolo encourages the students to live a life for God that is risk-taking, willing to reach out to the masses to minister. In this section, he examines the idea of wealth of the spirit versus wealth of the world. He encourages the students to live in a reflective way. Finally, he discusses the importance of doing acts that will affect people in a powerful way. These are the kinds of acts that will live on after death. Finally, he reflects on the differences between white Canadian audiences and African-American audiences. His final point, taken from an African-American preacher, is: “It’s Friday, but Sunday’s coming.” The group then sings “He is Lord.”
Notes provided by BF, student assistant, 2010/2011