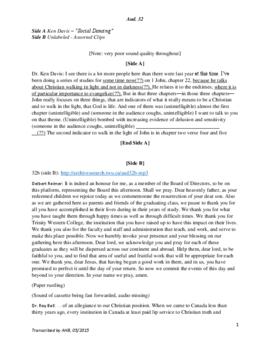 Audio 32a consists of the following recording:
Title: Ken Davis – “Social Dancing”
Davis begins by examining 1 John 1 & 2 and relating the message of these chapters to the concept of social dancing, in an attempt to help the students understand why it is included in Trinity Western University's Community Standards. He argues that social dancing is a gateway to other sins. Davis states that each individual is ultimately responsible to God on his or her own, but argues that actions are not usually taken on one's own. He argues that everyone is affected by how one lives or acts. The Church of Christ speaks collectively to the world and setting out an expectation for behaviour is a way for the church to speak. He also argues that behaviour is set environmentally by having standards; community values are maintained despite the changes in student population. Having addressed the concept of community standards as a whole, he then discusses social dancing specifically. Davis describes the sensuality of dancing and examines the nature of sin. The recording is cut off suddenly and a list of graduates' names, places of origin, and degrees is read. The group is led in prayer.
Audio 32b consists of the following recording:
Title: Unlabeled - assorted clips
This recording opens with a prayer from Delbert Reimer, representing Trinity's Board of Governors at a graduation service. There is an odd noise [1:58] as the recording changes to an unidentified speaker discussing the evolving relationship between education and truth. [This is likely Dr. Roy Bell, a BC educator born in Northern Ireland, and listed as the Commencement speaker in the graduation program for 1984] The speaker then discusses the breakdown of Christian values in society. The recording cuts off again and someone whispers "James 1:27" as Dr.Davis can be heard speaking in the background (sound quality of this section is very poor). This is possibly a continuation of the lecture on Aud. 32a. Davis discusses constructive, godly growth through Christ. He discusses the seriousness of premarital sex, adultery, and all that leads to it. He also discusses the disintegration of true love when sex occurs prematurely, as well as the difficulty of supervised dancing within the Believer’s Church. He argues that Christians need to exercise discerning judgment at all time. Davis takes questions from those listening.
The recording cuts off and Dr. Neil Snider can be heard speaking at a graduation ceremony, asking those gathered to "stand with us" and encouraging the students to stand firm in the faith and be courageous. (sound quality of this section is improved)
Dr. Ken Davis extends a special word of appreciation to faculty member John Woodland, to a round of applause. Davis introduces valedictorian Robert Alan Enns, who speaks on the changes witnessed by the graduating class and the importance of God, and of love. An unidentified speaker then reads a list of names of graduates who have achieved high honours.
Notes provided by BF, student assistant, 2010/2011

Quality of recording is very poor