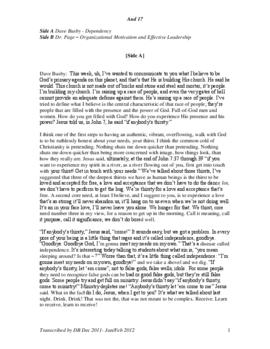 Audio 17a consists of the following recording:
Title: Dave Busby - Dependency
Guest speaker Dave Busby continues his lecture series on the Church that God is building out of God-filled people. He discusses the concept of dependency, focusing on three major points: what dependency is not, what dependency is, and what dependency looks like. Busby argues that dependency is not trying harder and drinking from the well of false idols. Instead, a dependant person knows that Jesus is the only true well and turns to him, not only in a storm, but in the calm as well. Busby illustrates his points with several interesting stories about his own life and the lives of those he’s ministered to over the years. See also Aud 16
Audio 17b consists of the following recording:
Title: Dr. Page – Organizational Motivation and Effective Leadership
Dr. Page focuses on the importance of doing business, not more efficiently or expediently, but rooted in God’s direction. He references Exodus 18 and the appointment of judges as a comparison to building an organization through delegation. Dr. Page discusses the importance and difficulty of delegation. He emphasizes that leaders must know to whom they are ultimately responsible: God. He also notes that one of the key elements of delegation involves clearly outlining the limits of the authority granted to the delegates. Another key point is to choose people who are God-seeking and trustworthy. Finally, he notes that the most important element of leadership is that the leader contains a teachable spirit, that he/she is open to new ideas and asks for help when needed. Dr. Page relates his lecture to the recent restructuring of the university and insists that the actions of the university are founded in the Word of God.
Notes provided by BF, student assistant, 2010/2011