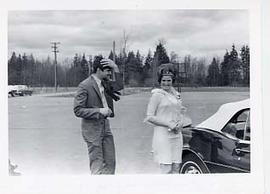 Photograph of Marge Stewart, out-going queen, with a male student outside during Homecoming 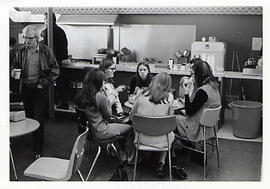 Photograph of students seated at a table in the Sanck Bar, located in the Arts and Science building 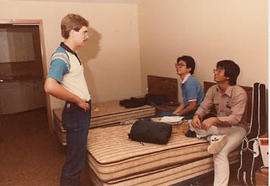 Photograph of three male students moving into their dormitory. 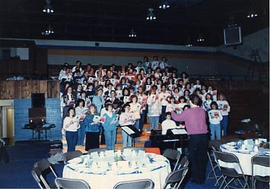 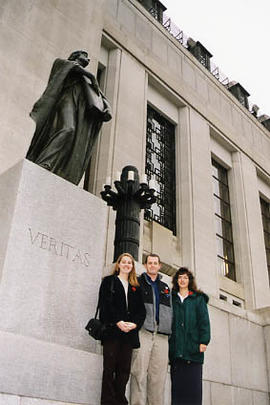 Donna Lindquist with two other students

Photograph of Donna Lindquist, education student, standing with two other individuals - possibly also Trinity students - at the Supreme Court of Canada building during the Legal Challenge / Education court case. Above and behind them is the Statue Veritas 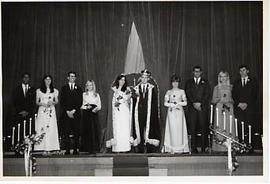 Photograph of the Homecoming Queen and King, Darlene Ball and Bob Bailey, and the princesses and their escorts 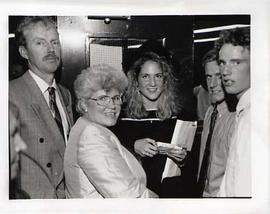 Tom Bulick and Rolf Kurth on the Leadership Retreat

Photograph of staff member Tom Bulick and student Rolf Kurth "moshing" - jumping towards each other with front torsos meeting in the middle - on the Student Leadership Retreat on Thetis Island. 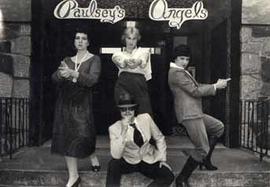 Students posing in a spoof on "Charlie's Angels"

Photograph of four students posing on the steps of the Arts and Science Building, under a sign reading "Paulsey's Angels," in a spoof on the television series, "Charlie's Angels." 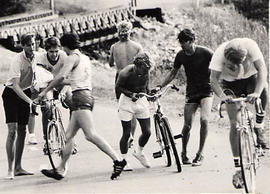 Students climbing on bicycles during The Challenge