File consists of newspapers and magazine articles related to Martin Abegg and Peter Flint's work with the Dead Sea Scrolls and the Institute.

Series consists of academic programs within SAMC, including Art + Design and Travel Studies.

Subseries consists of records related to the Art + Design program. 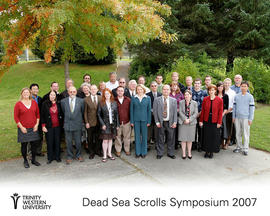 Parte deOffice of the Provost Fonds

File consists of inaugural lecture invitations and programs for full professors and Canada Research Chairs, including: Dr. Peter Flint "The Significance of the Dead Sea Scrolls for Canada and Modern Society"; Dr. Jens Zimmermann "Faithful Interpretations of Humanity: Religion, Culture, and Ethics After Christianity"; Dr. Eve Stringham "Of Worms and Men: What Model Organisms Tell Us about Human Disease"; Dr. David Squires "Out of the Closet as a Composer: or, How I Learned to Stop Worrying and Love Beauty"; Dr. Robynne Rogers Healy "Tales of an Incidental Quaker Historian: A Friendly Journey Through the Past"; and Dr. Andrew Perrin "Mapping the Uncharted World of the Aramaic Dead Sea Scrolls: The Canonical, Conceptual, and Cultural Impact of Understudied Ancient Texts". 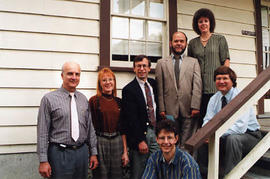 Photograph of seven faculty members from the Religious Studies and Music Departments, all of whom had offices located in Faculty House, sitting and standing on the stairs of that building 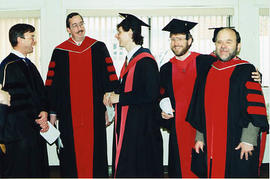 Photograph of five Religious Studies faculty members in full regalia, standing together as they prepare for a graduation service