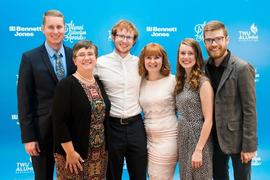 Photograph of members of the Sikkema family posing together at the awards dinner. Those pictured include faculty member Arnold Sikkema, Valerie Sikkema, and their son William (third from left), winner of an Alumni Distinction Award 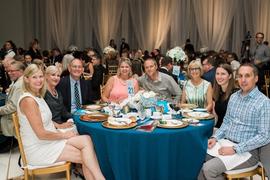 Photograph of guests seated at a table during the awards dinner. Those pictured include Judi (Johnston) Vankevich, Joni and Scott Fehrenbacher, Janice Nikkel, and Amanda Flint 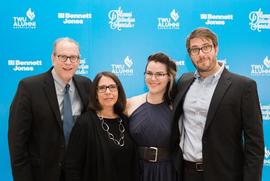 Photograph of members of the Auxier family posing together at the awards dinner. Pictured are faculty members John and Doris Auxier, and Mary and Jonathan Auxier. Jonathan was an alumnus and 2017 ADA award recipient 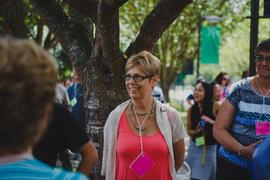 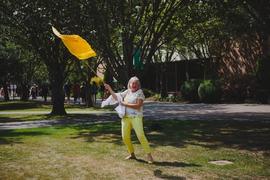 Photograph of Business professor Andrea Soberg waving her team flag outside, on the annual Community Day 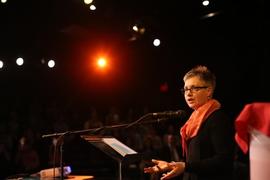 Photograph of professor Erica Grimm speaking during the 5th anniversary celebration for the School of the Arts, Media and Culture (SAMC) on April 8. Since its launch, the School had produced 236 graduates 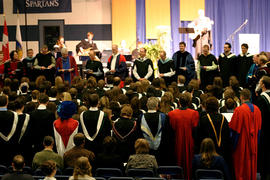 Photograph of faculty encircling the graduating students for the commissioning, or prayer, during the Baccalaureate Service held the night before the formal graduation ceremony. 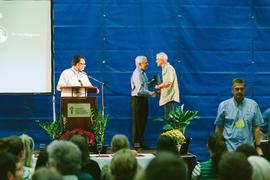 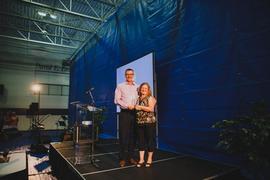 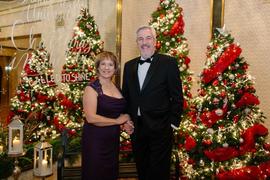 Photograph of Colette and David Squires taken at the annual fundraising event. David was a Music professor and Dean