The Ethiopian Manuscripts Collection contains four codices (bound manuscripts) written in Ge'ez, the traditional liturgical language of the the Ethiopian Orthodox Church. Text manuscripts include Psalters, Biblical Canticles, the Song of Songs, Ethiopian Orthodox works known as The Praises of Mary and The Gate of Light, and The Bandlet of Righteousness. The collection also consists of carrying cases associated with holding related religious texts, such as the Ethiopian Kitabe leather amulets.

File consists of records including minutes of Public Affairs meeting - January 5, 1978; Projected Development Needs 1973-1976; Report to the Board of Governors of TWC from Robert N. Thompson, Vice-President - January 11, 1974; a copy of "Thrust", the quarterly news and review magazine for the EFCC - April 1973 [reference to Robert N. Thompson's retirement as President of the EFCC]; and mock-ups for a promotional brochure 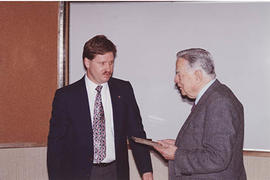 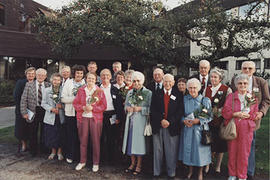 Photograph of a large group of founders, staff, and supporters of Trinity, next to the apple tree outside the RNT Building. Development staffer Inga Warnock is on the far left, and Ron Paulson is centre, back. 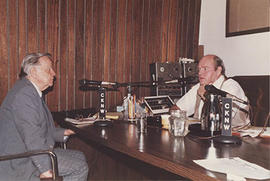 Bob Thompson being interviewed on CKNW

Photograph of Robert N. Thompson sitting across from a radio host, being interviewed for CKNW Radio. 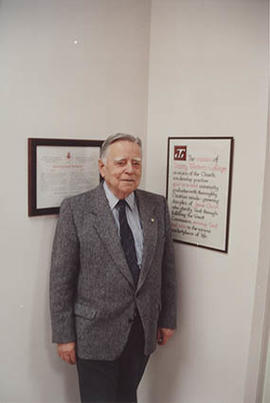 Bob Thompson in the University Archives

Photograph of Robert N. Thompson standing next to two framed documents, in the TWU Archives. The item behind his right shoulder is his Order of Canada documentation. Following his retirement, office space was set aside for him within this department. 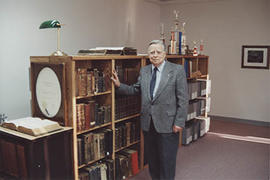 Bob Thompson in the University Archives

Photograph of Robert N. Thompson standing next to shelves containing archival materials and special collections, in the TWU Archives. Following his retirement, office space was set aside for him within this department.