Audio 253a consists of the following recording:
Title: “1994 advertisements”
This is an advertisement for Trinity Western University’s “Insight 94” event. This event is a precursor to “View Days”. Students are invited to spend two days on campus and attend a Christian rock concert. At [1:02] there is an additional advertisement for “The Spirit Victory '94”, a Christian rock concert, featuring Keith Brown, to be held on campus. The event seems to be sponsored by the TWU Student Association. Both spots feature music - possibly by Keith Brown - in the background. [Based on the cassette label, it's likely these ads were to run on The Bridge, a Christian radio station.]
Notes provided by BF, student assistant, 2010/2011
Note: audio cassette label reads: Trinity Western University :60 Insight 94; :30 Victory 94; The Bridge February 1, 1994

Digitized sound file not attached, due to copyright restrictions
Audio 255a consists of the following recording:
Title: “Haven of Rest Canada Day Broadcast”
Bob Thompson is interviewed by Haven of Rest host Paul Evans. There is music throughout the recording. At [4:00] the interview with Thompson begins. They discuss the history and importance of Canada Day. At [11:25] there is music performed by a group of male singers accompanied by a piano. At [13:19] the interview continues. They discuss the current spiritual status of Canadian politics and Canada as a whole. At [19:40] there is further music and singing. The interview resumes at [21:53]. Thompson is asked about his prayer for Canada as a nation. At [23:24] there is further music and singing. At [26:56] the host of the program prays.
Audio 255b consists of the following recording:
Title: “Haven of Rest Broadcast”
Paul Evans of Haven of Rest reflects upon Dr. Robert Thompson's Canada Day visit in this broadcast. There is music and singing intermittently through the recording. This music features a mixed group of singers accompanied by percussion instruments, a synthesizer, and a keyboard. At [9:15] Thompson shares his testimony; he prefaces his comments by stating that he is not a theologian. He relates several personal stories and anecdotes. At [22:28] there is further music and singing. At [25:] Paul Evans prays.
This recording is a duplicate of Aud. 286.
Notes provided by BF, student assistant, 2010/2011

Audio 19a consists of the following recording:
Title: Dr. Page – “Materialism, Secularism, and Pluralism”
Dr. Page, Academic Vice President, argues that because politicians are feeling such a large amount of pressure from alternate viewpoints, while not hearing from the Christian point of view, the latter is being forgotten. However, he continues that if we build an argument on Christian values even non-Christians will listen, because they are searching for meaning. He then takes questions from the audience. He notes that the Church functions best when under persecution and, currently, it is under persecution by secular humanism. He briefly touches on the issue of amending the Human Rights Act to include sexual orientation. Then, Dr. Page offers recommendations on how to write an action letter to an MP. Petitions, form letters, multiple signature letters are ineffectual. However the most important letter you can send is a personal letter to your own MP. He answers a few more questions. An unidentified person closes off the discussion.
Audio 19b consists of the following recording:
Title: Dr. Lynn Buzzard – “The Importance of Christian Values and the Law”
Dr. Buzzard, Staley lecturer, continues his lecture series and discusses the importance of Christian values and the Law. He argues that when a society loses its lawfulness, it doesn’t result in anarchy; instead it results in many little laws. He discusses the volume of lawsuits occurring in the United States and illustrates the issue with personal stories. He then continues to explore how the Law fails to serve an important role in society due to the loss of core values. Having stripped God from His connection to law, what goes in His place? He argues that the universities have abandoned the quest for truth. Dr. Buzzard encourages the students to ask, “What is a proper interaction between Law, Justice, and Biblical Values?” The Church should be an advocate for Justice. Often interest in Law is based on personal gain. He argues that the Law can fail. Too often people pin their hopes on the false god of law, but passing a law does not fix a failing of society. [32:20] A new section begins, wherein an unidentified speaker discusses the conversion of the Honduran cabinet to Jesus Christ. Only Christ is the hope for change. He speaks on the assets of Canada; the world has a positive view of Canada and this gives the Church an opportunity to reach out to others. Now is a time, states the speaker, when Christian values can have the greatest impact on the world since WWII. He relates a personal story about interacting with a scientist. A student begins to ask a question; the recording ends before the speaker answers.
Notes provided by BF, student assistant, 2010/2011
[Lynn Buzzard served for fifteen years as executive director of the Christian Legal Society and Center for Law and Religious Freedom before joining the Campbell University Law faculty in 1985.
Source: http://law.campbell.edu/faculty-staff/lynn-buzzard.html (accessed November 18, 2010)] 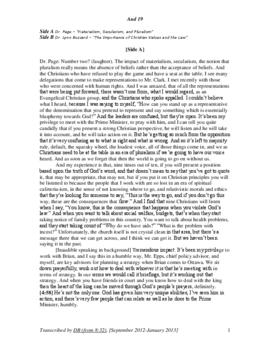