The fonds consists of both professional and personal documents relating to Mr. Smith’s career, and includes position papers, correspondence, briefing papers, news clippings, books, articles, and photographs.
Series within the fonds are:

This series consists of government publications, position papers, conference proceedings, submissions, addresses, and other materials on a variety of topics, filed in subject order by Mel Smith.
Note that this is not a complete list. Additional government publications, briefing binders, as well as books - sorted primarily in alphabetical order by title - are also available for for use on site. Contact the archivist for more information

Box 88
B.C.’s Submissions and Speeches on B.C.’s Place in Confederation

01 Proclamation Regarding the United Canada Month, 1979 (9 copies)
02 Senate Idea would make Federal System more Balanced, by the Montreal Gazette, February 1979.
03 Closing Remarks by the Honourable W.R Bennett at the First Ministers Conference, September 1980.
04 Submission of Premier William R. Bennett on behalf of British Columbia to the Special Joint Committee on the Constitution of Canada, January 1981.
05 A Confederation Debater with the Best: Bill Bennett minds His Shadow, by Peter Calamai, July - August 1978 (22 copies)
06 How will the New Constitution affect us? To a Panel Discussion of the Constitutional and International Law Section, by Melvin H. Smith, September 1981.
07 Notes for a Presentation by the Honourable K. Rafe Mair Minister of Consumer and Corporate Affairs Chairman, Cabinet Committee on Confederation to the Special Committee of the Senate on the Constitution of Canada, September 1978.
08 “Centripetal Federalism” – The Viable Option for Canada, by Honourable K. Rafe Mair, November 1978.
09 British Columbia: Pacific Region of Canada, by John D. Weston, July 1979.
10 A Reformed Senate as a Vehicle for Federal - Provincial Relations, by Melvin H. Smith, January 1983.
11 Speaking Notes for Address to the Parliamentary Committee on Senate Reform, by Honourable Garde B. Gordom, (October 1983.
12 Opening Statement. The Honourable William N. Vander Zalm premier Province of British Columbia First Ministers’ Conference Vancouver, November 1986.
13 A Fair Deal for British Columbia, 1976 - 1986.
14 Federal-Provincial Continuing Committee of Ministers on the Constitution - Opening Remarks by the Honourable K. Rafe Mair, Chairman of the Cabinet Committee on Confederation, November 1978
15 Regional Perspectives of the Canadian Federation, by Honourable K. Rafe Mair, Minister of Consumer and Corporate Affairs, October 1977

01 The Amendment of the Constitution: This is a Draft of a Proposed Version of British Columbia’s Paper concerning the Amendment of the Canadian Constitution.
02 A Restructured Upper House in Canada, by the Cabinet Committee on Confederation.
03 Fundamental Human Rights and the Constitution - The Pros and Cons, by the Cabinet Committee on Confederation, 1970.
04 Various Amending Formulae, December, 1980.
05 Constitutional Reform: Taking Stock and Looking Ahead: An Issue Paper, by Melvin H. Smith, July 1982.
06 British Columbia’s Constitutional Proposals: Reform of the Canadian Senate, 1986.

01 Federal Arrangement in West Germany and Switzerland, 1978.
02 Petroleum Production in Australia: Offshore Resource and Income Taxation, 1991.
03 Draft Constitution, by the Committee of Experts for the Preparation of a Total Revision of the Federal Constitution, 1977.
04 Prices and Earnings around the Globe: A Comparison of Purchasing Power in 41 Cities, by the Union Bank of Switzerland.
05 Landtag Rheinland - Pfalz: 8 Wahlperiode, 1976.
06 Briefing Book for Visit to British Columbia of Dr. Bernhard Vogel, First Vice-President of the German Bundesrat and Premier of the Rhineland Palatinate, by Melvin H. Smith, 1977.
07 Briefing for Trip to West Germany & Switzerland, by Hon. K. Rafe Mair, Mr. Mel Smith & Mr. Tony Stark, January 1978.
08 Anno 709 P.G.: Final Report of the New Helvetic Society Conference Forecasting (Translated from the Abridged German and French Texts), 1974.
09 Articles and Brochures regarding German Political System, 1976 - 1978.

01 Wales Bill: Explanatory and Financial Memorandum.
02 Scotland Bill: Explanatory and Financial Memorandum.
03 Our Changing Democracy: Devolution to Scotland and Wales, Presented to
Parliament by the Lord President of the Council, Secretary of State for Scotland and Secretary of State for Wales by Command of Her Majesty, November 1975 (2 copies)
04 Principles of Federal Policy Co-ordination in the Federal Republic of Germany:
Basic Issues and Annotated Legislation, by Bernd P. Spahn, 1978.
05 Television - Radio Broadcasting on the European Continent, by University of Minn. Press, 1967.
06 The Everlasting League: A Survey of Switzerland, February 1979.
07 Swiss Federalism in the Twentieth Century, by Max Frenkel, Max, 1978.
08 Federalism and Constitutional Review in Switzerland: Studies and Research Group
Federal - Provincial Relations Office. Government of Canada, by John A. Hayes,
June 1975.
09 A British Senate? Lord Home Points the Way to a Reformed Upper House. The
House of Commons will not, unless persuaded, be keen to follow it, by the
Economist, 1978.
10 German Federalism: Material Received from External Affairs under “Information Flow” Arrangements, October 1979.
11 Switzerland in Figures, by Union Bank of Switzerland, 1977.
12 Introducing Switzerland, by Olivier Reverdin.
13 Draft Constitution of 1977: Unofficial Translation by Jurg K. Siegenthaler with the Collaboration of Christoph Leuenberger and Arlene Weingart, 1977.
14 The Basic Law of the Federal Republic of Germany, 1977.

01 Time: The Weekly Newsmagazine (Vol. 130, No 1), July 1987.
02 The Virginia State Capital
03 The Court and the Constitution: Comments on the Supreme Court. Reference on Constitutional Amendment, by Peter Russell et al, 1982.
04 The United States of America: A Government by the people, by United States Information Services, 1966.
05 The White House: A Brief History.
06 Australian Federalism, by the Centre for Research on Federal Financial Relations, 1977
07 Nomination of John Paul Stevens to be a Justice of the Supreme Court: Hearings before the Committee on the Judiciary United States Senate: Ninety-Fourth Congress. First Session of Nomination of John Paul Stevens of Illinois to be an Associate Justice of the Supreme Court of the United States, December 1975.
08 Nomination of Abe Fortas, by the Committee on the Judiciary, September 1968.
09 Nomination of Thurgood Marshall, by the Committee on the Judiciary, August 1967.
10 Official Gazette of the Cortes of Spain, by the Senate of Canada, October 1978.
11 Devolution in Scotland, February 1978.
12 The Australian National University: Centre for Research on Federal Financial Relations. 1977 Report on Activities, 1977.
13 Constitutional Reform - Australian Style, by the Canadian High Commission - Canberra, 1986.
14 Towards Statehood: Land Matters upon Statehood, November 1986.
15 Aboriginal Development Commission: Who are the Australian Aboriginals? Speech to the Royal Commonwealth Society by the Chairman of the Aboriginal Development Commission Mrs. Shirley McPherson, February 1987.
16 Towards Statehood, August 1986.
17 Federalism in Canada and West Germany: Lessons for the United States, by William A. Glaser, June 1979.
18 Views and Surveys: The Reform of the Belgian State, by Robert Senelle, 1978.

Box 96
Working Papers on the Constitution / Government of Canada

File includes a copy of the memorial service program and newspaper clipping remembering the life of Eileen Enarson. Eileen worked in Trinity's administration and she was married to David Enarson who was one of Trinity's founders and administrators.

Fonds consists of records including newspaper articles, obituaries, service programs, and email announcements documenting the passing of individuals connected to Trinity Western University in some way. These individuals include students, alumni, staff, faculty, and administrators.

Sous-fonds consists of various artifacts and objects that showcase Robert Thompson's personal, military social, educational, and political life. The collection includes textiles such as military caps and badges and a family kilt, jewelry, medals and pins, baskets, metal, stone and wood statues and figurines, swords and daggers, and organic objects such as a peacock fan and a fly swish made of horsehair. In addition, there are plaques awarded and given in recognition for Thompson's involvement in numerous organizations. The collection also includes a small sample of political cartoons. 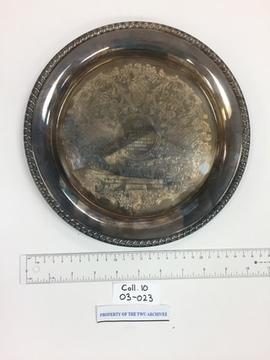 Object is a round silver-toned plate with stamped design and edging; the inscription reads: "Trinity Western University in Recognition of its 25th Anniversary Celebration 1961-1986". The stamp on the back reads: "Wm A. Rogers, Made in Canada, S.P. Brass" 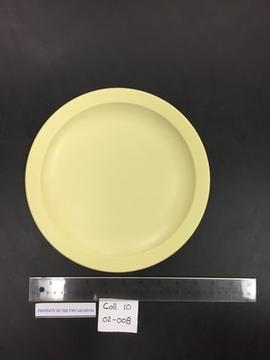 Object is a yellow Maplex dinner plate used in the original dining hall in Seal Kap House.[Maplex was one of three main factories in Canada that produced melamine (plastic) dinnerware.] 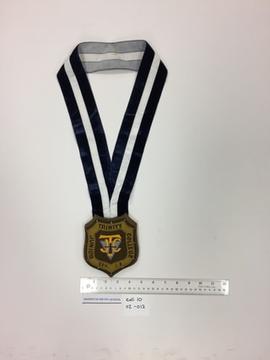 Object is an embroidered, felt TJC crest pinned or tacked to a wooden base carved to match the crest in shape and dimensions; the whole is attached to a wide navy & white velvet or velveteen ribbon which may have been intended to be worn looped around a wearer's neck as part of some official regalia. Note that the crest itself is approximately 11.5 x 12 cm in size, and the base appears to be solid wood 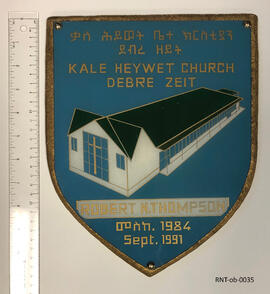 Object is a shield shaped plaque honouring Robert Thompson's involvement in the Kale Heywet Church located in southern Ethiopia. The plaque is made of plexiglass pinned to a plywood base that has been painted gold. The plaque's background is aqua with gold lettering, and features in the centre an aerial view of the church building with the emphasize of santuary space with a large window with a cross. Thompson's name is highlighted in a white background.