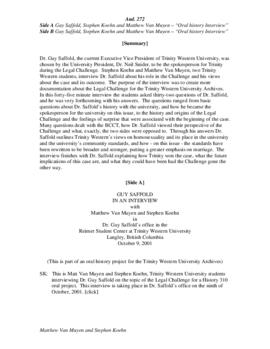 Audio 48a consists of the following recording:
Title: Gerry Organ – “Chosen in the Heart” / Gerry and Lore Organ – “Marriage” / Doug Shantz – “Existentialism”
Gerry Organ, a former Grey Cup Champion (1973 and 1976) who played from 1971 to 1983 in the Canadian Football League, speaks to students at chapel about the importance of being chosen in the heart, of being loved by Jesus. He illustrates this point with several sports-related personal stories. He encourages the students to love everyone equally and make someone’s day. He leads the group in prayer. At [11:50] this section ends and a second Organ chapel presentation begins. He invites his wife Lore to speak. Together they read from Colossians and discuss the importance of Christian marriage. They discuss the difficulty of deciding whether or not to stay at home. Lore leads the group in prayer. At [27:57] Doug Shantz (TWU Professor) speaks at chapel on the dangers of existentialism and “new age” thinking.
Audio 48b consists of the following recording:
Title: Dave Enarson – “The Dream of TWU” / Baruch Goldstein – “Jews for Jesus” / Ken Davis – “The AUCC”
Enarson is interviewed (possibly by Human Resources Director Bill Norris?) about his role in the creation of Trinity Western University. This interview also includes some of Enarson’s personal history. He recounts his experiences on the planning committee, including references to Henry Friesen, who was convinced that the Seal Kap property was the place for Trinity. His wife, Eileen, also makes some comments about her personal life and involvement at Trinity Western University. At [18:52] this section cuts out suddenly and a representative of Jews for Jesus, Baruch Goldstein, can be heard addressing a chapel service. He mentions that this is his second visit to the Trinity campus. He argues that the difficulties Jews have with the Good News are not theological, but cultural. He then relates several amusing anecdotes about Jewish culture and his faith. He ends by pronouncing a benediction, first in Hebrew, then in English. At [37:30] this section ends and another chapel service, already in progress, begins, with Dr. Ken Davis discussing his involvement with the AUCC. He discusses bringing Howard Petch of the University of Victoria to campus and convincing Petch to support TWU’s acceptance into the AUCC. He leads the group in prayer.
Notes provided by BF, student assistant, 2010/2011

Audio 178a consists of the following recording:
Title: Many Speakers – “Founders’ Week”
This recording documents a Founders’ Week Banquet. Various speakers share their experiences at Trinity Western University. These speakers include Mr. David Enarson (Founder and member of Board of Governors), Dr. Robert Thompson (Board member, administrator, and lecturer, Mr. Benno Friesen (founding faculty member and MP), Dr. Neil Snider (TWU President), and Dr. Calvin Hanson (Founding President). They share their vision for TWU, the struggle to make it a reality, and the many clear indications that they were following God’s will. Diane Denney, Student Council Vice President, expresses her appreciation for those who paved the way for her TWU experience. Former President Calvin Hanson reflects on his years at Trinity. He is cut off in the middle of a sentence. [There is a partial transcript available of Ms. Denney’s address.]
Audio 178b consists of the following recording:
Title: Many Speakers – “Founders’ Week”
This is a continuation of the recording on Aud. 178a. Cal Hanson continues to describe his Trinity Western University experience. At [23:22] Dr. Neil Snider shares his excitement regarding plans for a “consortium seminary”. [There is a partial transcript available of Cal Hanson's address as well as Dr. Snider’s address.]
Notes provided by BF, student assistant, 2010/2011
[“Founders’ Week,” a joint effort of both the Student Association and TWU Administration, took place from February 23 to 28 in 1987.]

Audio 254a consists of the following recording:
Title: Many Speakers – “Vespers”
The recording begins with piano music. At [6:45] an unidentified woman - possibly a student - addresses the graduating class. She discusses what it means to be a light for God. At [9:00] the group is led in prayer by an unidentified man - possibly another graduating student. The group is led in songs of praise, possibly by one of the chapel worship teams, a mixed group acompanied by a piano, synthesizer, drums and guitar. At [25:24] a second unidentified woman (later referred to as Carmen) is invited to speak. She reads from Romans 8, about the love of God. Another unidentified woman speaks, reflecting upon her Trinity Western University experience as a transfer student. The group is again led in song.
Audio 254b consists of the following recording:
Title: Many Speakers – “Vespers”
This is a continuation of the event on Aud. 254a. The group is led in songs of praise. This section of the recording features a mixed group [chapel worship team?] singing a variety of Christian songs accompanied by a piano, drums, synthesizer, and guitar. At [3:16] an unidentified man leads the group in prayer. He then shares his testimony. At [9:13] an unidentified woman speaks on revival. At [11:20] another unidentified woman reads Isaiah 40:28-31. At [12:57] an unidentified man recounts his grade five encounter with C.S. Lewis. At [18:10] the music resumes. At [22:14] an unidentified woman [Suzanne] - the same woman featured at the beginning of Aud 254a - makes some closing comments. At [24:00] Peter Van Giesen, Director of Alumni Relations, briefly discusses alumni benefits. He introduces Deborah Grey, MP, who is presented with the first Alumni Award of Distinction. Stephen [Steven Friebel? Alumni Association President] is invited to speak. He discusses his experience of graduation. He is cut off in the middle of a sentence.
Notes provided by BF, student assistant, 2010/2011
Commencement Speaker