"Correspondence giving events leading up to the B.C. Crisis and the formation of the BC Social Credit League, 1949" [note on folder] 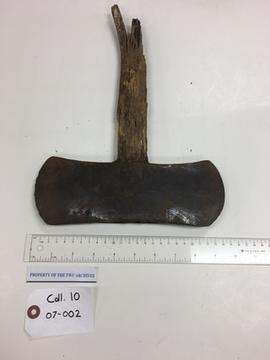 Photograph of the Old Canadian Forest Products Locomotive #3, BC department of railway #260. A 70 ton 3 truck Shay Geared locomotive built at Lima Locomotive Works in 1913. It is reported as being the first delivered to a Company in Eastern Canada and was later lost in the St. Lawrence River. It was later salvaged and purchased by Nimpkish Timber Company and put into service on Lower Nimpkish River in 1921. A new boiler was installed in 1929 and a new frame in 1944. It remained in regular service as a switcher locomotive for Woss or Vernon Camps.

Map of the Fraser Valley

Object is a gold-coloured medallion set in wood between two pieces of plastic/plexiglass. The medallion displays a crest and a bust along with Ethiopian lettering. The card inside reads "Presented to R.N. Thompson by Prince Makonnen Hailie Salassie Duke of Harrar June 1951".

L. Wicks standing on a dock in front of a floating plane

Photograph of L. Wicks standing on a dock in front of a floating plane