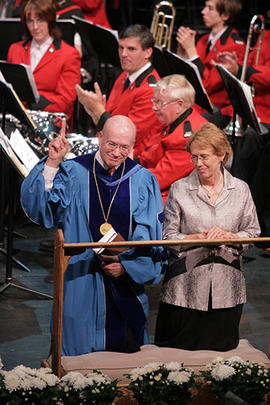 Photograph of Jonathan and Irene Raymond during the inauguration ceremony. 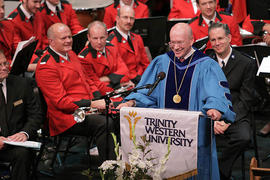 Photograph of Jonathan Raymond speaking at his inauguration ceremony. Members of a Salvation Army band can be seen, behind him. 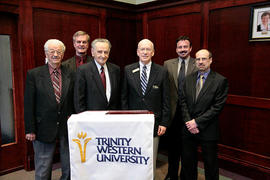 TWU establishes an agreement with the Mennonite Faith and Learning Society

Photograph of representatives of the MFLS with administrators from TWU and ACTS. Those pictured include John Redekop, Jonathan Raymond, Dennis Jameson, and Bruce Guenther. On February 14, 2011 an agreement was signed between TWU and MFLS for the establishment of an endowed professorship / chair in Anabaptist-Mennonite Theology. 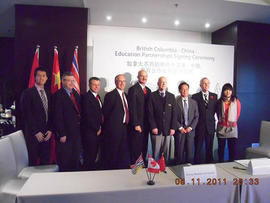 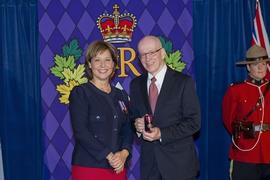 Photograph of Premier Christy Clark presenting President Raymond with the Queen’s Diamond Jubilee Medal in recognition of his "leadership to BC communities." The ceremony took place on January 31, 2013 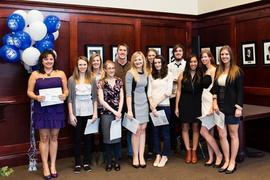 Students inducted into the new Chapter of Psi Chi

Photograph of twelve of the fifteen students inducted into Psi Chi membership, during a ceremony held in Alumni Hall. TWU's Chapter of Psi Chi, the International Honor Society in Psychology, was installed under the leadership of long-time Associate Professor of Psychology Chuck Macknee on October 7, 2014