Report of the Commissioner - The Honourable Mr. Justice Gordon McG. Sloan - relating to the Workmen's Compensation Board, British Columbia

Headquarters of the Social Credit League of British Columbia

Photograph of headquarters located at 2315 Brunswick Street in Vancouver 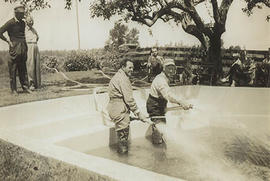 Photograph of members of the Willoughby Fire Department filling the Seal Kap Farm swimming pool for the first time. The donor indicated that the owner, Dan Armstead, may be the person standing on the left side of the photograph, wearing light-coloured shirt and trousers.

File consists of records including: correspondence, primarily between Mr. Louis Even, of the Union of Electors, and Dr. J.N. Haldeman, President of the Saskatchewan Social Credit League