Audio 143a consists of the following recording:
Title: Rebecca Verhaeghe – “Interview”
A man - possibly Greg Charyna, TWU Alumnus (1989) and member of Trinity's Public Relations department - interviews Rebecca Verhaeghe, alumna (1984), on how her experience at Trinity Western University impacted her life. [The interview may be conducted over the telephone; the recording volume for Verhaeghe's replies is very low] She describes her current position, as a social worker and family therapist working in a hospital in York County, and discusses the impact of faith-based education. This interview is intended as the basis of an advertisement for Trinity Western University in Faith Today magazine.
Notes provided by BF, student assistant, 2010/2011
[After serving 12 years as a pastor, Greg - along with his wife Karen - opened Home Instead Senior Care in Saskatoon]

Audio 46a consists of the following recording:
Title: John Kelsall – “Lord of My Life”
1991 Christian Leader in Residence, John Kelsall (formerly of Canadian Pacific Railway - VP of
Operations and Maintenance with CNR since 1988), speaks on the difference being a Christian makes in his everyday life. He describes the effects of turning his life over to God. He reads John 3:21 and Matt 6:33 and discusses them in relation to Romans 14. He argues against praising oneself; one should praise others instead. He emphasizes the importance of prayer through an anecdote about rescuing bulldozers.
At [12:39] a praise chapel cuts in with a piano and someone singing “He has made me Glad” and a few other worship songs. Finally, this unidentified person leads the group in prayer.
Audio 46b consists of the following recording:
Title: President’s Chapel: Dr. Snider / Doug Harris
Two students interview President Snider on a variety of topics, including the AUCC, his own education, Mission statements, pressure, and his wife’s health. Finally, the group is led in prayer.
At [18:26] a new speaker comes in and discusses the importance of humility and asking for help when needed. He discusses the issue of God testing people and argues that tests are important; they are often given in order to show people they are able to trust in God. This unidentified speaker then leads the group in prayer.
Note: The names of Stan Dyer and Doug Harris (President, Northwest Baptist Theological College) are recorded on the tape label, but neither is identified or introduced at any point in the recording
Notes provided by BF, student assistant, 2010/2011

Audio 65a consists of the following recording:
Title: David Hocking – “Praising God”
Dr. David Hocking (pastor, Bible teacher, and radio broadcaster) discusses the importance of praising and glorifying God - the theme of Trinity's 30th Anniversary. He argues that it is the responsibility of all Christians to depend on God and act for His Glory. He discusses the difference between prayer and worry. He encourages students to rely on God. He discusses the relevance of Trinity Western University’s mission statement in glorifying God.
Notes provided by BF, student assistant, 2010/2011 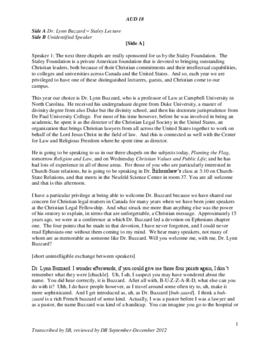 Digitized sound file not attached, due to copyright restrictions
As part of a joint Oral History project of the Public Archives of Canada and the Parliamentary Library, journalist, writer, and broadcaster Peter Stursberg interviewed former Social Credit leader Robert Thompson in September, 1981.
Title: "Robert N. Thompson - His Memoirs in an interview with Peter Stursberg in Dr. Thompson's office in the Robert N. Thompson Building in Trinity Western College, Langley, British Columbia, September 23, 1981. (This is part of an oral history for the Parliamentary Library and the Public Archives)"
Audio 279a consists of the following recording:
Thompson begins by providing some background on the missionary organisation known as the Sudan Interior Mission (SIM). He describes how Roland Bingham recruited the Thompsons in 1943, "with the understanding that when our government obligations were through I would consider joining the mission and do so out on the field rather than coming home. So in 1951, when I resigned from the government service there ... I moved over to the Sudan Interior Mission ..." Thompson discusses various groups of people living in Ethiopia at the time, and the need for schools, as well as hospitals for those suffering with leprosy. There is a detailed discussion of the educational system in Ethiopia.
Audio 279b consists of the following recording:
Thompson explains some of the reasons for his decision to leave the Ethiopian Government. He discusses the establishment of the Boy Scouts in Ethiopia, and then describes serving as aide-de-camp (ADC) to the Duke of Harrar, the Emperor Haile Selassie's son, on a trip to North American in 1951. The conversation then turns to the establishment of the Leprosarium, and to Haile Selassie's family.