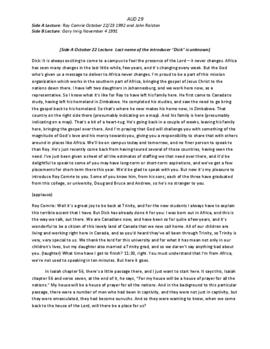 Audio 29a consists of the following recording:
Title: Roy Comrie – “Canada, a Mission Field” and “Communication”
Roy Hall – “Holiness”
Missionary Roy Comrie speaks to students in chapel about missions. He reads extensively from the Bible. He argues that Canada has become one of the neediest places for missions. The apathy of the Western Church is the greatest problem in the world. He believes that the greatest need in the world is that those who name the name of Jesus Christ be “clean”. God grants purpose. Comrie illustrates the need for testimony in Canada with a personal story. He relates a few other personal stories including bringing Bibles to North Korean troops in Zimbabwe. He then leads the group in prayer. This section ends and a second chapel service begins. Comrie begins with an anecdote about miscommunication. He begins to speak about the Book of Revelation, but the recording cuts off suddenly. A third recording begins with John Ralston, from the Career Center, making announcements and introducing Roy Hall. Hall speaks about Trinity Western University as a distinct society. He discusses the importance and meaning of holiness. He illustrates his points with several personal stories. Hall emphasizes that one should not falsify his or her application or resume. A resume is a reelection of one’s testimony to the world. It should reflect the values of the individual.
Audio 29b consists of the following recording:
Title: Gary Inrig – All Campus Chapel – “Being Christian”
Pastor and author Gary Inrig speaks in chapel on what it means to be a Christian and to live a Christian life. He argues against limiting what defines a Christian to a list of actions. Instead, he believes that only by building a personal relationship with Jesus Christ can one truly know God and be Christian. Inrig argues for the glorification of God. Despite the beauty of Vancouver, the people who live here fail to recognize the Glory of God. He illustrates his points with personal stories. He points out there is a difference between knowing about God and knowing God. He calls the students to glorify God and to enjoy God. He argues that the purpose of life is to do, one hundred percent, the will of God. Finally, he leads the group in prayer.
Notes provided by BF, student assistant, 2010/2011