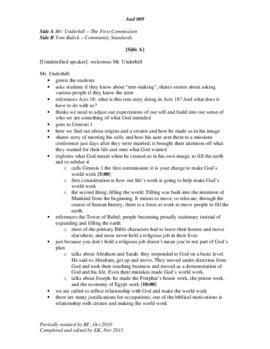 Audio 9a consists of the following recording:
Title: Mr. Underhill – The First Commission
Speaking at Chapel, Mr. Underhill advocates that no matter a student’s chosen profession, the first commission of God is to make His world work. Mr. Underhill references several biblical passages: Acts 18, Genesis 1, Mathew 28:18, Acts 8, 1 Peter 2:9, and the majority of Acts. He argues that the duty of everyone in the service of the Lord is to make the world work and to spread the Word of God. Mr. Underhill notes that many Biblical figures moved from place to place and worked at professions that were secular in nature. He feels that people are made in the image of the Lord and have two duties: to make the world work and to fill it. Mr. Underhill illustrates his points with readings from the New Testament. He then relates a personal story where an associate discovered that Jesus Christ is working through everyone constantly. Finally, he concludes by leading the students in prayer.
Audio 9b consists of the following recording:
Title: Tom Bulick – Community Standards
Tom Bulick addresses the rationale behind TWU's community standards while speaking at Chapel. He explains that community standards have three purposes: to promote a sense of community, to provide context for positive peer influence, and to establish an orderly community. Mr. Bulick then defends the following three areas of the community standards in terms of biblical and practical reasons: the use of tobacco, the use of alcohol, and social dancing. He illustrates his points using personal stories. Finally he leads the group in prayer.
Notes provided by BF, student assistant, 2010/2011